He’s really too big for this car cart and I can’t lift him anymore into it, but he climbed into it today to sit happily next to his sister.  He did it for her and she squealed in delight, the way he once did.  And as I pushed them around the store, I had to wonder how many more times he’ll ride in this cart at all.

For years, he’s begged to ride in these car carts at the home improvement stores or at the grocery store.  Mostly, I’ve given in, but other times, in an effort to dodge germs or to navigate quickly or easily down an aisle, I have secretly hoped he wouldn’t remember to ask or spot one in the entry of the store.

For years, I’ve lifted him in if it was a high car, helped him duck his head in the hatchback cars, or buckled the seatbelt around his chubby waist.  He’s made “vroom, vroom” noises as we’ve navigated stores for supplies for home renovations or ingredients for hungry bellies.  I’ve dodged end caps and displays, run into other carts or walls, all in the pursuit of this small joy for him; a car cart has the power to turn a child’s dreaded shopping experience into the adventure of the day.

And today, he only climbed in because his almost two-year-old sister wanted him to.  He’ll be seven this summer and most of the other trucks and cars he’s loved are now in donation boxes as they’ve been traded for two huge drawers of Legos, Star Wars toys, art supplies, various balls–soccer, baseball, and basketball–and books.  He has kept a few trucks, but they mostly go unnoticed and I often think of them missing him as they sit in the dark of the closet.  They once kept a small boy entertained for hours and hours,
and now, he’s onto other interests, as children often are.

And soon, he won’t want to climb into this car cart, even to make his sister laugh, and like the smaller, hatchback car carts at the grocery store, he won’t even fit into this one either.  It was a stretch today and I actually stopped to take this photo because I truly think this might be the last time my little boy rides around the store in one at all.

And just like that, the cars and trucks have practically vanished from the life of a little boy who was once obsessed.  He did say “vroom, vroom” today as we drove around, but only to teach his sister.  And I stopped and took mental note of how beautiful this moment really was to me–there in the fluorescent lights of Home Depot pushing a car cart I have silently disliked for years.  Today, it all was beautiful.  Beauty was right there before me in the everyday and I’m just so happy my eyes were open to see it.

Thanks for Mothering the Divide with me here, as we all try to see some beauty in the everyday this weekend. 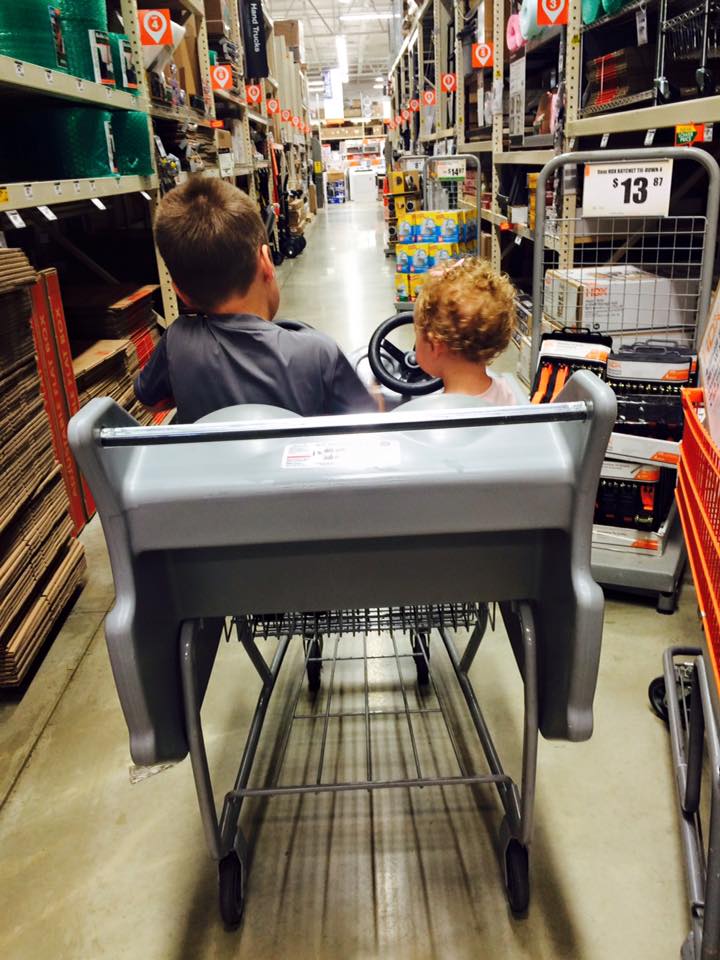