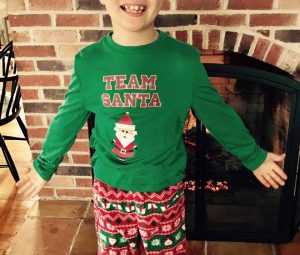 Yesterday, on Christmas morning, my son and I were the only two awake in the quiet hush of a snowy morning. We crawled under blankets in his bed and just talked while we waited for his sister and daddy to wake up. He told me, in the excited way only a child who still believes in Santa can, that he thought he heard reindeer on the roof–a weird scratching, slightly muffled. He thought he heard the banging of a glass against the plate of cookies and the crinkling of presents. He wanted to creep downstairs to see if Santa had arrived but he was too worried what might happen if he caught him in the house.

He rattled on and on, his growing bigger by the day hand in my own. I stared at him, in awe, really, of the gift of him–the gift of a lifetime. And while his face is absolutely taking the shape of the man I’ll once know, I couldn’t help but to notice his waning baby cheeks as he spoke to me in the excited hushed tones of an eight-year-old. I took it all in and it became my prayer, right in the glow of the blue lights his bed is adorned with: “Dear Lord, don’t let me forget.” This might be the last Christmas he believed. This might be the last year his baby cheeks still show. But I will remember. I memorized it; I really did. And in the hustle and bustle of an over scheduled and overwhelming holiday season, I paused and took that moment all in.

Thanks for Mothering the Divide with me as we pause this holiday season to see what really matters. 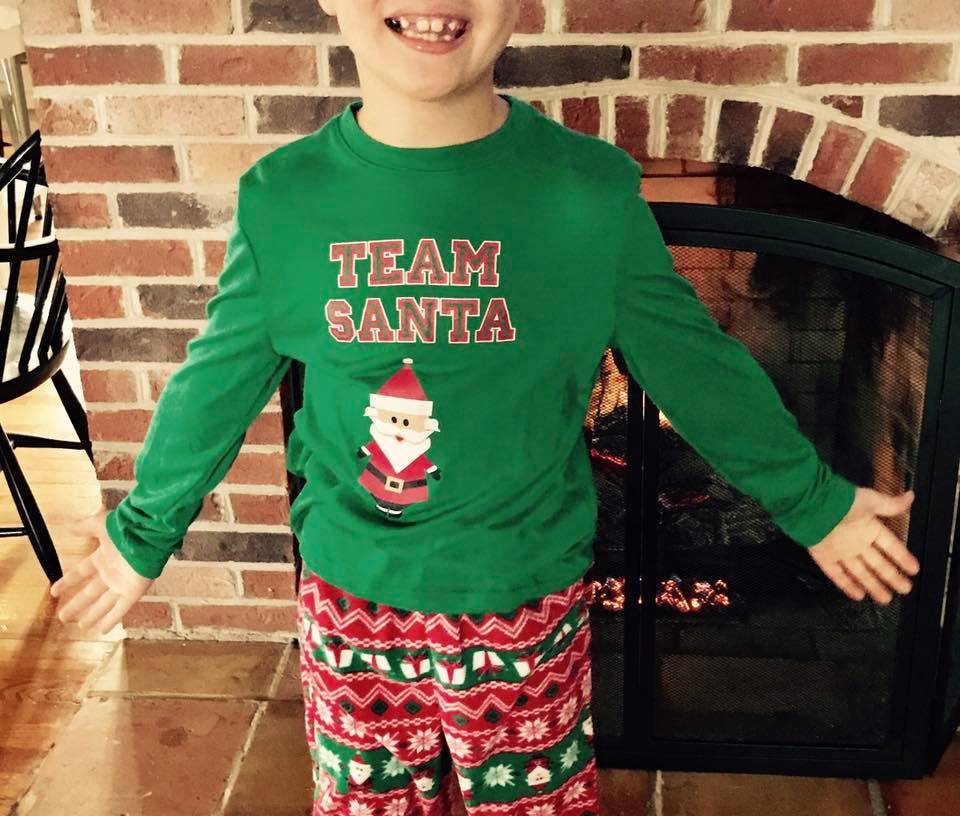 My son, now over seven, fell off of a stool this afternoon when we were building a gingerbread house.  While he was fine and giggling, I bent down to pick him up.  And I couldn’t lift him.  Try as I might, I couldn’t hoist him up into my arms I once deemed strong.  Instead, I kissed his cheek and pulled him close.
For over seven years, I’ve picked him up and while I knew it was coming to an end (and I have written about that before), here we are:  I cannot pick him up easily or really, at all.  After over seven years of carrying him until my arms hurt, bouncing him and shushing him, holding him cheek to cheek, carrying him in a sling and on my back, carrying him up the stairs and from his bed to mine, this phase has passed.  And with this realization come others, as the Christmas season is upon us.
He and his sister sat for the annual photo with Santa this past weekend and when the photo was printed and given to us, I was struck by the length of his legs.  Did they simply look so long because he had red pants on–pants I did pick for once and he gladly wore?  Eight years ago, his legs were curled as he was tucked in my womb making me so sick I had to miss all Christmas festivities.  How are they so long now?
Tonight, my children sat out their shoes for St. Nicholas and his boots are so big.  I remember when his feet were small and I rubbed them as I held him and he drifted to sleep. Now, his boots are on the hearth and I can imagine them, year by year, getting bigger as I trip over the ones left at the door.  How are his boots so very big? Where are his baby feet?

END_OF_DOCUMENT_TOKEN_TO_BE_REPLACED 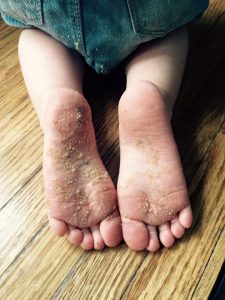 These tiny feet belong to a little girl going through the “terrible twos,” or so I’ve been told.

Before 8:00 a.m. this morning, my daughter spilled my coffee, her cereal, and planted herself on the floor of the shower, yelling “No, Mommy” when I opened the door.  In turn, I planted myself outside of the door with a fresh cup of coffee and just watched her play.  I texted a friend and she told me just to sit and take in how cute it all was.  So I sat and I did just that.

By 12:00 noon, she dumped a bowl of crackers, smeared peanut butter all over my couch, and climbed on the counter and pulled over a vase of flowers she had helped me cut in the garden.  She wanted to help arrange them and said “I help, Mommy.”  So, we arranged the flowers together and she was very proud.  And I smiled and kissed her strawberry blonde head. END_OF_DOCUMENT_TOKEN_TO_BE_REPLACED 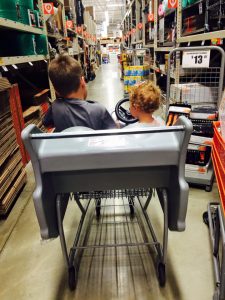 He’s really too big for this car cart and I can’t lift him anymore into it, but he climbed into it today to sit happily next to his sister.  He did it for her and she squealed in delight, the way he once did.  And as I pushed them around the store, I had to wonder how many more times he’ll ride in this cart at all.

For years, he’s begged to ride in these car carts at the home improvement stores or at the grocery store.  Mostly, I’ve given in, but other times, in an effort to dodge germs or to navigate quickly or easily down an aisle, I have secretly hoped he wouldn’t remember to ask or spot one in the entry of the store.

For years, I’ve lifted him in if it was a high car, helped him duck his head in the hatchback cars, or buckled the seatbelt around his chubby waist.  He’s made “vroom, vroom” noises as we’ve navigated stores for supplies for home renovations or ingredients for hungry bellies.  I’ve dodged end caps and displays, run into other carts or walls, all in the pursuit of this small joy for him; a car cart has the power to turn a child’s dreaded shopping experience into the adventure of the day.  END_OF_DOCUMENT_TOKEN_TO_BE_REPLACED