Tonight, I remembered the beauty of slowing down and the childlike wonder in an average walk around town.

You can’t be in a rush if you take a walk with my son, but sometimes, I try to rush him anyway.  Usually, I don’t have any reason at all other than it can be frustrating to walk at a snail’s pace.

He stops every few steps and tonight, on our walk around town, I just allowed his pauses and excited exclamations at the robin and the moss and the scaffolding at the court house.  I practiced noticing with him and tried to see the world as he sees it.

Today, he noticed and found a four leaf clover in a patch of clover. He bent down and sifted through the patch and found it, holding it up in victory.  He later gave it to his sister as he hands filled with treasures, and she dropped it somewhere along the way.  Instead of being upset as I expected, he just told her that the luck rubbed off on them already.   And the clover inspired a conversation about Ireland, its history, and how much I love it there.

He got a map from the small visitors’ table in our favorite consignment store and when we left the store, he read the map to me and directed us down this street and that one. As he read aloud to his sister and me, we all learned a lot about our small town.

He picked up tree branches in the churchyard down the street and was insistent about dragging them home.  At first, I told him no and that he must leave them there, but when he explained that he was doing it to help the man who mows the grass, how could I say no?  He dragged the branches for three blocks and never complained.

These are just a few examples of the discoveries he made on our stroll around town.  And I discovered something, too.  There is beauty and discovery in taking your time.

If I had hurried him, I wouldn’t have heard him form the words in the brochure as he taught us about the town.  He wouldn’t have had the opportunity to practice navigation with a map and to feel the pride and responsibility of leading the way.

If had rushed him, he wouldn’t have done a small community service by hauling out big limbs. Because I didn’t limit the good deed, he practiced how to care for his community.

Children will show us the way if we let them.  And tonight, as usual, my son who is an observer like no other, showed me the beauty of slowing down and in the ordinary.  He showed me that learning is everywhere and that since I’ve been gifted a boy who notices everything, that maybe I need to slow down and notice it all, too.  A life lesson like no other and a slow return to who I once was–a girl with a face so much like my son’s who used to run wild in exploration.

Thanks for Mothering the Divide with me on an average Monday, as I saw the beauty in my small town, in the little boy I walked with, and in the memory of the girl I once was.  I hope you all take the time to take a walk, letting your child lead the way. 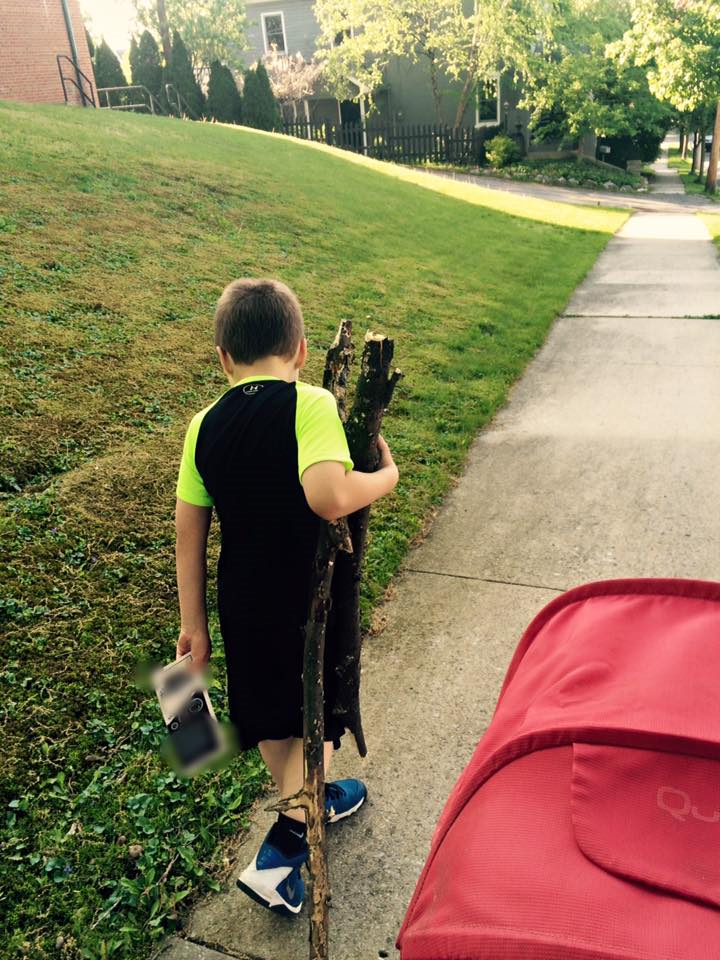