We recently went to our first parent/teacher association meeting in my son’s new school and I discovered that he has a crush. He’s just finished his first marking period of kindergarten, and because we had no babysitter, we took both kids to the meeting with us.  We arrived just on time and joined the other parents in the small gymnasium.  The meeting began and my daughter, too busy and loud to stay, was ushered to the playground by my husband.  My son normally would follow my husband outside at the chance to play, but he didn’t that night.  He asked if he could stay inside with me.  I was confused at first because I couldn’t imagine why he would opt to stay inside at a “boring meeting,” but then I realized the reason for his request:  an adorable, little girl with sea foam green eyes and honey-colored hair.

As I listened intently to the words of his principal, I occasionally turned around to see my son with this little girl. We have many friends with daughters and he plays with them all of the time; however, there was something different in his interactions with this girl with the green eyes.   There was a twinkle in his eye, a sly smile on his face.  I watched them play rock, paper, scissors— just like I did so many years ago.  It was just the two of them, playing and talking.  I kept my focus on the words of the principal, only to hear a snicker and turn to see this girl, smaller than my son, with her arms around him in a jacketed position.  He could have easily gotten out of this embrace, but he was smiling and I just smiled back, raising an eyebrow.  The little girl smiled, too.

After the meeting, I asked my son about his relatively new friend. He told me how much he liked her and how he felt differently about her; he liked her in a way he hadn’t liked someone before.  I kept the conversation casual, of course, but I couldn’t help but to ask him what he liked about her most.  He said, “Well, liking her is just an experience” his face flickering as he held back his smile.  He was quiet for a second and I was going to move onto another topic, but then he said, “Actually, I like her because she is kind and smart.”  His face lit up as he told me about her, and for the first time, I saw my son in a new light—the light of a little boy, smitten by a fellow kindergartner, his very first crush. 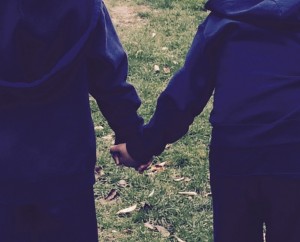 Later, as I thought about this little girl, I realized he said nothing to me at all about what she looked like. He didn’t comment on how her hair color is like wheat or that her eyes are like the color of the ocean as it meets the shore.  He said nothing about her mismatched clothing, which I admired because it showed her strong sense of self; I could tell she picked her own clothes and I liked her for it.  He simply told me how she was kind and smart, and that’s all that mattered to him.  At six, he sees her for who she is and I hope he always looks through those eyes.

He rattled on about her for a bit and our conversation ended, but not before I told him that I thought those were great reasons to like a person, and how actually, those were the reasons I like his Daddy.  Someday, even though it seems like it will be so far away, I’m sure, or at least I hope, we will have more serious conversations about school, friends, his dreams, and of course, of the crushes he has and even the first time he falls in love.  And I will be sure to listen, just like I was today.  Eventually, these small and innocent conversations will turn to more serious topics and I hope because I listen to him now, he will tell me about the big things when they occur later.

He reminded me that day to be sure I’m listening to the little things because someday, they will be the big things.  And for now, this crush on his fellow kindergarten classmate is a big thing to him.  He also called me to look beyond the surface to the soul of people.  My son sees his little friend’s soul, and he simply admires her for genuine reasons.  What more could any of us ask for from the people who love us?  To look them in the eye and see their soul?  We just want them to see us as a child does and in some ways, that’s when love is the purest.  How often do we look at others and see them for what they look like or what they have or do?  How amazing would it be to see people with childlike wonder?

For now, Matt’s still my little boy who has a crush on a little girl, and I’m so happy he told me about it.