Last Friday, I volunteered at my son’s school for his Halloween parade and kindergarten classroom party. At the end of the day, after I witnessed how happy he was at the school, we left and walked home, holding hands.  As we walked, we talked about how good it feels to be welcomed, included, and accepted.  My son has been lucky to find another safe haven–another place where he just can be himself.  He can simply just be the talkative and sensitive boy who walks to the beat of his own drum from time to time and worries too much.

It really made me think: aren’t we all looking for that place? Our safe place, just to be ourselves—complete with our insecurities and faults?   We spend our whole lives looking for these places, ones where people say “we love you, complete, and as you are.  Come and be here with us.  This is your safe haven.” 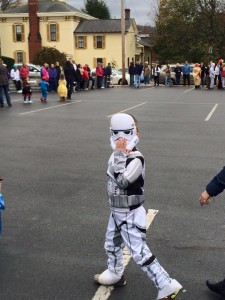 That day was brisk and it was so dreary and overcast; however, the smiles on the faces of the children truly lit up the school parking lot.   There were many Star Wars characters in the Halloween parade, but there was only one Stormtrooper in the group: my son. As he passed by me during the parade, he blew me a kiss.  It was a simple act–a natural thing for him to do.  With one quick gesture, I realized he felt like he could be himself.   He wasn’t too big or too cool to blow me a kiss during his school parade, but it represented more than that to me:  it showed me that he feels comfortable enough in his own skin, in the community of the school, to do what came to him naturally:  to express love for me, no matter who was watching.

After the bulk of the party was over, my son wanted to read to me his school book. He and I went to the back of the classroom and he read aloud to me, pride evident in his little voice.  It wasn’t long before another student, and then another, joined us at the table.  My son is an avid reader, and sometimes, he thinks to hide it.  But no one made fun of him.  Not one student made it seem like anything out of the ordinary.  Instead, these two little boys listened to him read.  And when he was done, his friend said to him, “Good job.  Would you like for me to put that book back for you?  I know where you keep them.”  They smiled at one another and my son handed over the book.  It was a quick exchange, but it spoke volumes.

Later, at the end of the party, the same friend came up and hugged my son–a tight, bear hug and both boys laughed. I watched a few of the kids hug one another at the end of the day.  They have formed a community already and it’s genuine.  It’s like they’re saying to one another, “Everyone’s in!  Everyone’s welcome here.  This is your safe haven.”

How long do we search for these safe havens, these pockets of places where we can be?  We look around, hoping someone will just like us for who we are, complete with our insecurities, faults, and inequities.  Just last night, I was with a group of friends and I worried that I had said too much about a particular topic.  I do that sometimes–say too much and then worry too much.  I mentioned it to one of the friends present last night and she replied, “You didn’t say too much, but I’d love you even if you did.”  My safe haven. 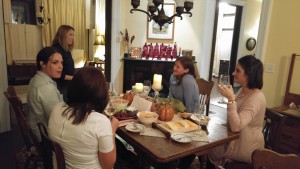 We meet friends and develop relationships, only sometimes to be pushed away when we say or do something wrong.  It’s hard to grow up and be who you were meant to be, and when we do—when we’re really and truly our most authentic selves—the rejections are hard to take.   If we’re lucky, we have people who love us, people who say to us, “No, you’re not perfect.  And maybe I don’t agree with you.  But I love you just the same. I am your safe haven.”

I’m happy my son has found another safe haven, one of many. I’m lucky that I have them, too.  Thanks for being here for me, here on the page, in this community we’re building.  It truly feels like my safe haven and I hope it feels like yours, too.