I met you today at kindergarten orientation.  The boys were both tentative, but my son came up to yours and asked his name.  Your son was quiet but warmed up to my mine right away.  After a few minutes, they ran to the corner of the classroom to play with a few toys.  I could see your face relax as I felt my shoulders fall.  The pain in my back reminded me that I had been tensing my shoulders since I walked in the door.  We were both relieved that they had found one another and we mentioned how each boy was nervous coming into the orientation.   And, we told one another how we were both nervous as first time kindergarten moms.

Just this morning, I looked at him and noticed that his cheeks are going away.  That might sound so weird, but everyone, everywhere, has always commented on his chubby cheeks.  Maybe you didn’t even notice them because lately, people haven’t been commenting on them as much.  His face is now thinning out, taking the earliest shape of a man I will know someday.  It’s just a hint of what he will someday look like, but the baby cheeks he’s had seem to be going.  His smile now takes up the largest part of his face.  And his smile is electric and contagious; instead of his cheeks, it’s now his signature.  His shorts are suddenly too short, as his legs seem to understand that he’s about to start kindergarten.  We promptly measured him and he’s grown two inches since the start of the summer.  As I looked at him this morning, my eyes filled with tears because he seemed to shift, right there before my eyes, from a baby to a little boy ready to start a new chapter.  I’m sure you’re noticing these things, too…. 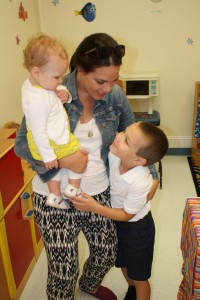 In the middle of orientation, my son came up to me, as I was leaning on a desk, and crawled into my lap.  I was surprised, really, because he seldom does this unless we are at home.  I just realized that in that moment, when he crawled in my lap—that he hasn’t crawled into my lap in front of others for a while now.  I drew him close and held him, as he told me he had been nervous but that he was happy he made a friend so quickly.   I looked around the room and saw your son with his arms around your leg.   They might be starting kindergarten, but they are still our babies, you know?  We are opening our arms and sharing them with the world, but they are still our little boys.  I think they will always be our babies, in one way or another.

After I put my son to bed, I went through old pictures and found one of me on my first day of kindergarten in 1984.  I had on a white, crocheted poncho and was standing in front of the school bus.  It’s a total throwback picture—the yellowed camera paper from 31 years ago.  Believe it or not, I looked a lot like my son does now and I can see his face in mine.  I can remember that day well, actually, as I’m sure you probably remember the day you started kindergarten, too.  I was lucky to have my brother and sister on that bus with me and I took comfort in sitting with my big brother.  He held my hand on the entire ride—the entire 30 minutes on back roads to get to our rural school—and when we got to school, he walked me into the classroom.  I remember seeing him in the hallway later and he smiled at me.  I felt safe and loved, even though I was very scared.  Do you remember your first day?  Like me, I’m sure you’re replaying your first day of kindergarten as you get his backpack ready and buy his back-to-school clothes. 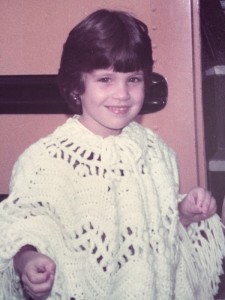 We’re in this together.  I said that to you as we parted ways, and I mean it.   Little girls who started kindergarten over thirty years ago, in separate schools, in separate states, now have little boys starting kindergarten together in this same school, in this same state.   And you know what, mama:  we can do this together.  I will see you on the first day of kindergarten.  I will be holding my son’s hand as I walk him in and you will be holding your son’s hand, too.  And we will smile above their heads, fighting back tears in our eyes, as we open our arms for one last hug.  And as they find one another in the classroom, happy and excited to start this new adventure, maybe we can walk back to our cars together.  I will have chocolate in case you need it.  Unfortunately, I won’t be wearing a white poncho.