“If you don’t want to swim, don’t swim,” said the beautiful, older woman with sparkling blue eyes and long, gray hair.  I remember her hair because she was fixated on mine, stroking my long, brown hair as she spoke to me, her ocean blue eyes piercing my green ones.   We weren’t anywhere near a swimming pool and I had no idea at the time what she really meant by the words.  She was an Alzheimer’s patient and I heard her words well before I ever became a mother.  We were visiting my husband’s grandfather in a hospital wing for Alzheimer’s patients, and the woman was drawn to me; the nurse thought I must have reminded her of someone.  And so I sat, letting her stroke my hair, as she kept repeating her words about swimming, and stopping to grab my face to stare into my eyes.   Since then, I have thought of her words as a metaphor—don’t do things you don’t want to–but lately, I’ve been applying them in my life with my son.

My son is almost six, and he cannot swim. I’ve ve literally echoed her words: “If you don’t want to swim, don’t swim.”  But, it’s a matter of safety, so he must learn how to swim.  If he doesn’t want to swim, fine, but he must know how.  Despite our best efforts to teach him to swim, he simply is terrified of the water.  Once, when he was two, we went to the beach and our house had an in- ground pool with a fence around it.  My son wouldn’t even step foot inside of the fence.  We cajoled, bribed, and finally got him to stand inside of the fence on the very last day.  He screamed the entire time—the entire two minutes until we thought that maybe we were traumatizing him.  So, we thought “we’ll try again later.”

Later came when we enrolled him in a swim class the following year.  My husband got in the pool with him for the “mommy and me” swim classes.  My son was three and the other children were mostly babies.  He still just held tightly to my husband.  He wouldn’t even try to swim.  And we really didn’t push it.  We just kept him in floating devices and he’s never been in the water without an adult.  This has gone on year after year, swim class after swim class, beach trip after beach trip, visit after visit to my siblings’ pools.  He won’t swim and it doesn’t seem to have anything to do with him being strong-willed (as we once thought) or not adventurous (as others have mentioned).  My son  is strong-willed, for sure, but he’s never dug his heels in about anything quite the way he has about this.  And, he is actually very adventurous in other ways.  He loves to meet new friends, try different and exotic foods, go to new summer camps, and he’s quick to pick up a musical instrument or wade into the creek to catch crawfish.    But he WILL NOT SWIM.

He just turned six.  We have plans to visit my brother again in California.  We are going to a water park at the end of August.  The kid must swim.  So, last night, my husband started the nightly trips to the pool at the YMCA.  My son sat on the steps of the pool for 45 minutes.  He wouldn’t even get in the pool, telling my husband all the reasons why he didn’t want to swim. But, finally, he stepped down from the steps.   And finally, he kicked his feet and tried to swim.

When I was putting him to bed, he told me all about it and I could sense his disappointment that it took him so long to gain the courage to get into the pool.  He told me that he was so scared of the water and that he was embarrassed that now, as a six-year-old, he can’t swim.  I explained to him all of the reasons why he needed to learn and that he just needed to do his best.  That if he does his best, there is nothing to be embarrassed about, but that if he won’t even try, he will never know what he is capable of.  As we snuggled in his bed, he grabbed me around the neck and whispered, “Well, I will just try harder tomorrow.”

And really, isn’t that all any one of us can do?  We just need to try harder.  As I lay with him, I thought back to the woman at the hospital all of those years ago, trying hard to deliver a message to me—one that I did hear loud and clear:  if we don’t want to swim, no matter what the swimming entails, we don’t need to swim.  But, if we don’t try, how will we know that we don’t want to?   I’m hoping my son uses this as a lesson:  try new things.  Be brave and courageous.  And, if after you’ve tried, you decide you don’t like it, that’s fine.  It’s the attempt that matters. 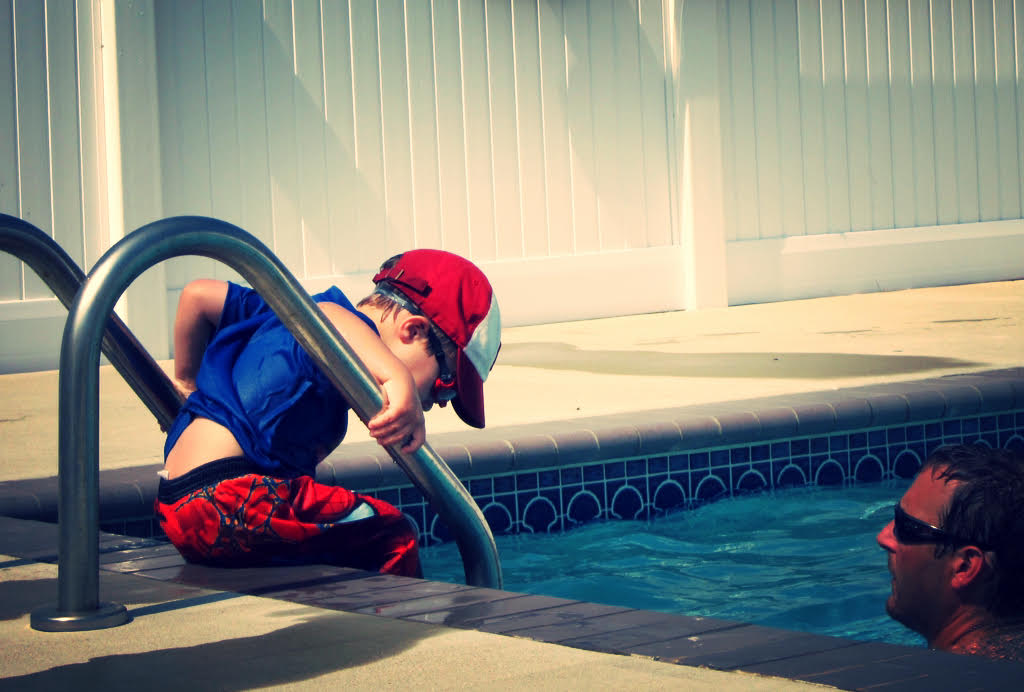